Alas, the dark cold is upon us

Well, bikes and boats are away for the season. And it seems to get dark shortly after noon. To top it off, there's no snow to ski or snowmobile.

But be of good cheer! Only a little over a month before we start gaining back daylight hours (very, very slowly).

Do any of you ride your S10 during the winter and if so what gear do you rely on?

PS this is a very quiet subforum.

Sent from my SM-N986U using Tapatalk

Dang! That was savage! Rub it in a little.

Sent from my SM-S906U using Tapatalk

Dang! That was savage! Rub it in a little.
Click to expand...

I couldn't resist. I honestly do feel for them up there. B.T.D.T. I was stationed in Kittery ME, and lived in York ME, and Dover NH for a few years. Absolutely freekin' gorgeous up there. The Kancamagus highway may have been my favorite. But when you get a Nor'easter up there . . . . motorcycling is the last thing on your mind.

Maine is definitely on my short list of states to visit, but it has to be in the summer. I wouldn't enjoy the beauty of the scenery if it's covered in snow. Snow looks nice but it's cold and wet. No thanks.

Sent from my SM-S906U using Tapatalk

Maine and the Northeast do snow right, unlike most of the mi-Atlantic States. People stop life in the mid-Atlantic, freak out when the first quarter inch of snow is simply forecast to fall; grocery stores have runs on bread and milk, and good luck finding gas. In New England they know how to dress, are always prepared because it's normal, have enough plows and salt, and go on about how warm and cozy it is to be inside.

Even so, I want my summer back! 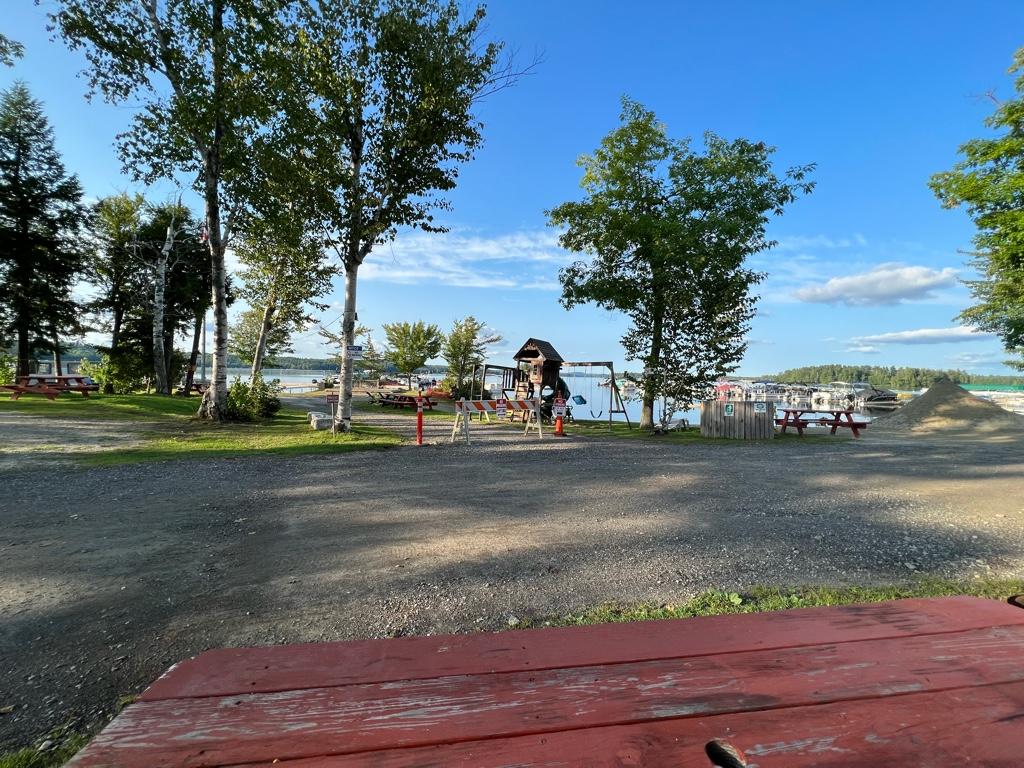 Near Augusta a couple months ago. Right outside the camper.

Checkswrecks said:
Maine and the Northeast do snow right . . . .
Click to expand...

I've never seen so many Subarus than when I was up there. Makes sense.

Sierra1 said:
I've never seen so many Subarus than when I was up there. Makes sense.
Click to expand...

Still, the right tool for the job. Your snow plus the grades?! I'd keep my Jeep, but Subaru is a legitimate alternative.

I do ride all winter but I live in KY. Not all that hard to do here. I have rode in snow several times but 4 inches of snow here is a lot. I only remember about 4 years in my life time that we got big snows like they do every year up north. Rode to work this week with temps in the low teens and with snow flurries. I use ski pants over my blue jeans with a sweat shirt inside my jacket. A insulated bandanna around my neck and over my mouth but under my nose the the bottom tucked in my jacket. I breath in through my nose and out my mouth to keep the face shield from fogging too bad. Of course good gloves. If I am taking a long ride I do use heated gloves in the 20 degree temps. If it is in the single digits I will use the heated gloves on my ride to work or town.
Now talking about the Subaru's in Colorado! I was on the million dollar highway a couple years ago and the rain was like a cow peeing on a rock! Mud was washing across the road and water was flooding every place running down the hills. I could see hikers coming out of the woods getting into Subaru's and then driving 60 mph or faster passing every body in blind corners! All of them were doing that! I called them nature freaks. Walking is so slow they had to drive way too fast to make up for it! haha. Really they were dangerous people. I would like to go back there when it isn't raining like that. haha.

Sierra1 said:
Still, the right tool for the job. Your snow plus the grades?! I'd keep my Jeep, but Subaru is a legitimate alternative.
Click to expand...

The ex had a Subie and I found the hard way previously that my old Jeep had better ground clearance but with the higher CG it sure rolled easy when it lost traction going sideways.
Never had that concern with her Subie.

Nowadays the electronic nannys keep that from happening on road. You can feel the back start to step out, and immediately the ESP brings it right back. Low range disengages all the safeties.

Lost is my destination.

We've had at least one Subaru in our garage for the past 30 years and probably won't ever be without one for our northeast needs.

Sierra1 said:
Nowadays the electronic nannys keep that from happening on road. You can feel the back start to step out, and immediately the ESP brings it right back. Low range disengages all the safeties.
Click to expand...

I haven't owned a Jeep in decades but periodically rent them, especially before retiring, and it has been interesting to see the slow addition of those "electronic nannys" over time.

We rented a 3 year old 35,000 mile Wrangler in Hawaii a few weeks ago and the whole experience was bad because we went through three Budget rentals in a week. I'd reserved a Wrangler and they said they had none when we arrived, despite eight sitting right outside the office. All eight had "issues to be corrected" we were told and that should've been a clue to ask for something else. They finally gave us a 2(?) year old Jeep pickup that looked like it had been beat, especially with the dirt & salt stained interior. My lady was not thrilled with the dirt and me knowing how tight parking can be in town and more maneuverable the Wrangler is I tried to trade it for a Wrangler the next morning when tourists were catching their outbound flights. It took the girl at the rental office a while to "find" one and it turned out to be 4 years old with something like 42,000 miles. It looked even more beat from 4 years of being a rental and looking it over I rejected it because the front right tire had no tread on the outer half and the left showed it was also clearly out of alignment.

Finally got a 2 year old hardtop with something like 24,000 miles, so things were looking up, despite it also being salt stained inside. The next morning when we were about to leave the rented condo the key fob wouldn't unlock it so I used the key blade then the burglar alarm went off, getting people in the condos above to come out on their balconies at 7am. As I'm looking for a way to stop it my lady looked on Google and found we "just" had to press the key fob on the start button while pressing the brake pedal. Called Budget and they said they had no Jeeps to replace it so we decided to keep it for the beach and some planned gravel trips. Since we had stuff to lock in the car during the day, I got to where I could unlock the door with the key, get my foot on the brake, and press the starter button with the burglar alarm honking only three times.

Then we bought some groceries we put in the back and when we took them out found them covered in ants, which is not a Jeep thing but added to the experience. Then we had to learn about the relation of buckling the seatbelts and making sure ALL doors were tight because it had an "auto park" nanny. What a pain in the a$$.

Hard to believe how tired those three Jeeps were with the relatively low mileage they had, especially with years of living with two fairly high mileage Foresters, a CRV, and Ford pickups. When I turned in the Jeep the guy said most of the ones sitting around parked also had "issues" for similar minor stuff. Ahh well, long story because the experience is so fresh and I'm sure most owners don't treat their Jeeps like those rentals. Regardless, we'll probably rent something else next time.

Sign of the times. The people that visit/rent the Jeeps, don't care about the vehicle. The people that provide the Jeep, don't care about the vehicle. I haven't got an alignment on either of my Jeeps . . . . ever. And my tires wear perfectly. How does "auto park" work when the doors are off? "Hill start assist" is bad enough. The Gladiator looks like a Wrangler, but it's on a full-size Ram frame, so it is not good in tight spaces. I would love to drive a Jeep in Hawai'i. But I'd have a soft top due to the frequent rains.

Mine is a '13 soft top, manual trans, with 54k mi, and I would not trade it for a hard top. It's supper tight and doesn't flap, and only takes a few minutes to fold back. It's also manual window/locks, without keyless entry or an alarm. I have put Tuffy brand lock boxes in under the driver/passenger seats, and a steel cover over the cargo area cubby.

It's been from here to both rims of Grand Canyon, Monument Valley, and Page. In Page, a two-wheel drive Ram thought it was a good idea to drive down on what used to be lake bottom. Ended up pulling him back to firmer dirt. Also took it to Colorado Springs, and Pike's Peak.

It has never skipped a beat, but it has been maintained. It's been driven hard, but not foolishly to where it broke/bent something.

Didn't realize the Gladiator is on the RAM frame and that answers a lot about how differently they felt! Hopefully the 2013 has less of the nanny features to potentially break. btw - On that key fob, I replaced the battery which didn't fix the problem. The check-in guy pointing to the other Jeeps on the lot said it was pretty common for them to "get stupid" and I'm not sure whether it just needs re-programming or something more. I've never had that problem in another button-start car or truck.

Hawaii is so green because there are constant passing showers unless you limit yourself to the dry side and the locals like to say they have a dry season that lasts about 6 minutes. I don't know if all Jeeps have the removable hard top panels but the ones offered for rent do and we kept them off as much as possible. Nice to be able to just pop off and on so quick to have the roof open. 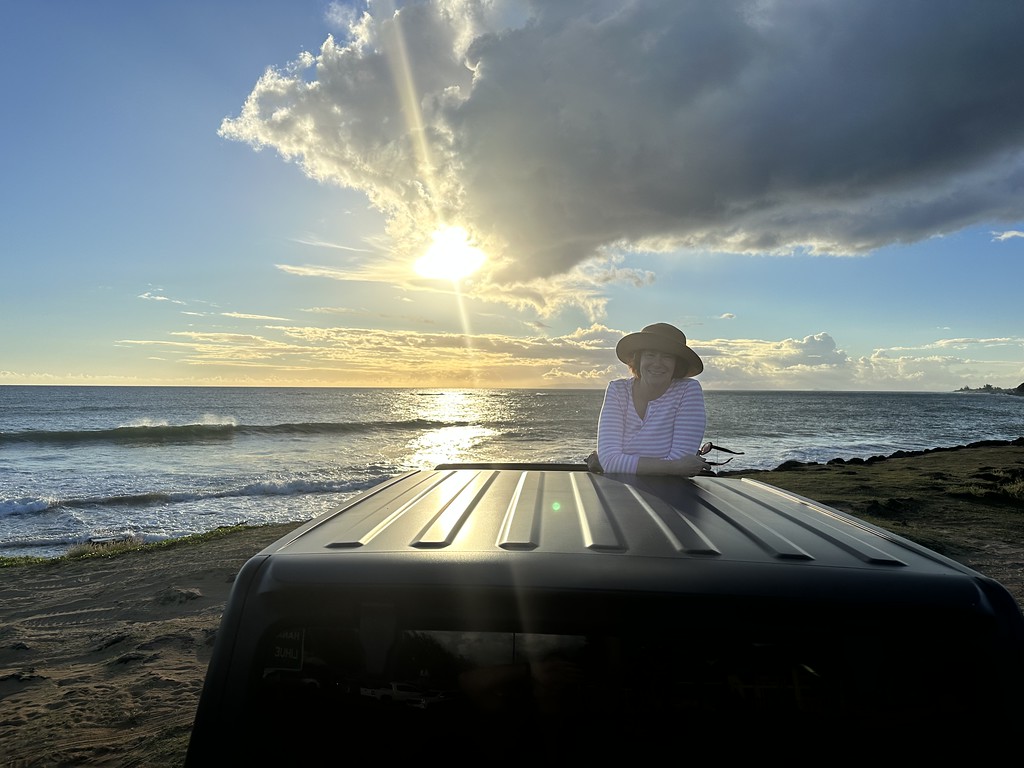